When I first started to see the public test, I took a try, and after a long application phase, I received a text message from Aunt Zhang on Friday evening to inform me that the application was successful. I was at the time. The mood is exciting. Because I don't normally buy lottery tickets. . . Then after a few days of waiting, when I got home from work today, I saw a courier package with the word â€œto valueâ€. 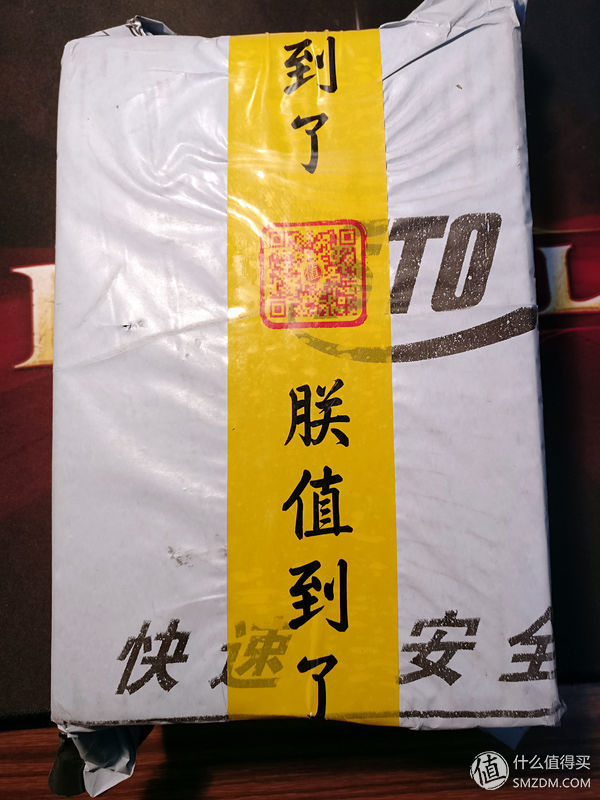 At this time, my mood is very happy ~ thanks to Zhang Aunt gave this test opportunity ~ So I am very happy to start unpacking ~ 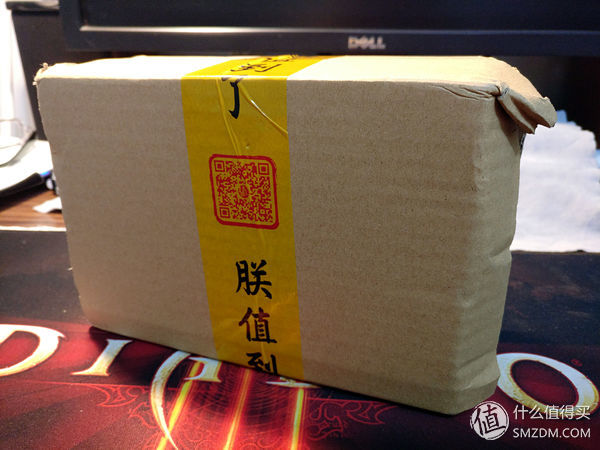 After opening the parcel, there is a layer of cardboard for protection. It should be Xiaobian's classmate who is afraid of causing damage during the transportation process. However, looking at the upper right corner and other places, it is still very necessary to do so. . . Express loading unloading we all understand. . . No nonsense, continue unpacking first. 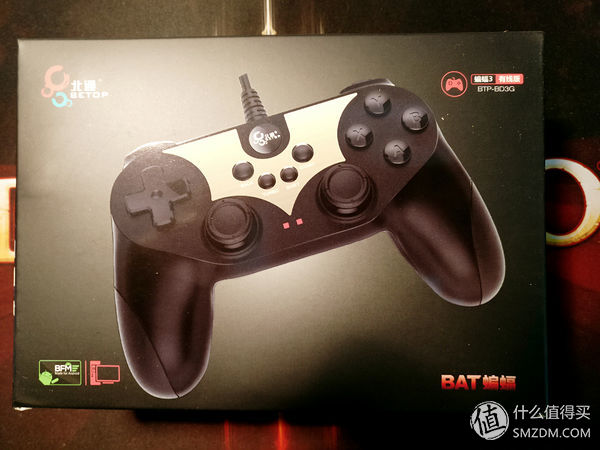 Open the outer layer packaging finally see the body of the box, the box is relatively ordinary no characteristics, of course, a handle also requires what ~ or open to see the body ~ 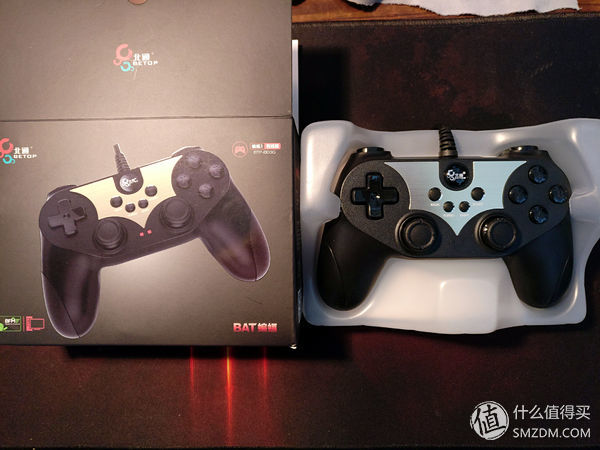 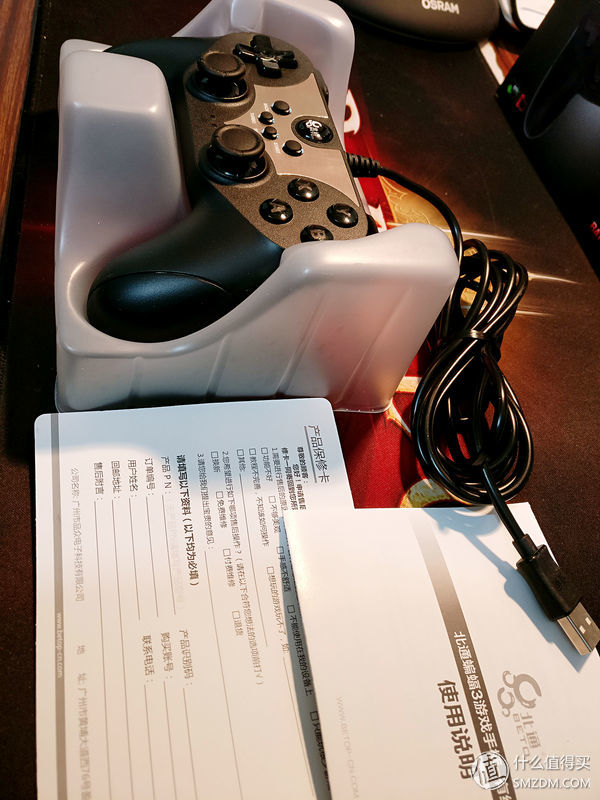 When you open it, you can see that the body and renderings are quite consistent. I think the design of the bat series is always a bit mediocre. Is it low-key? The middle of the handle is metal, the surface is brushed and the shape mimics the shape of the bat. The handle interface is a USB interface, the cable box is specifically indicated on the outer packaging box, and there may be a wireless version, like the Asura series. 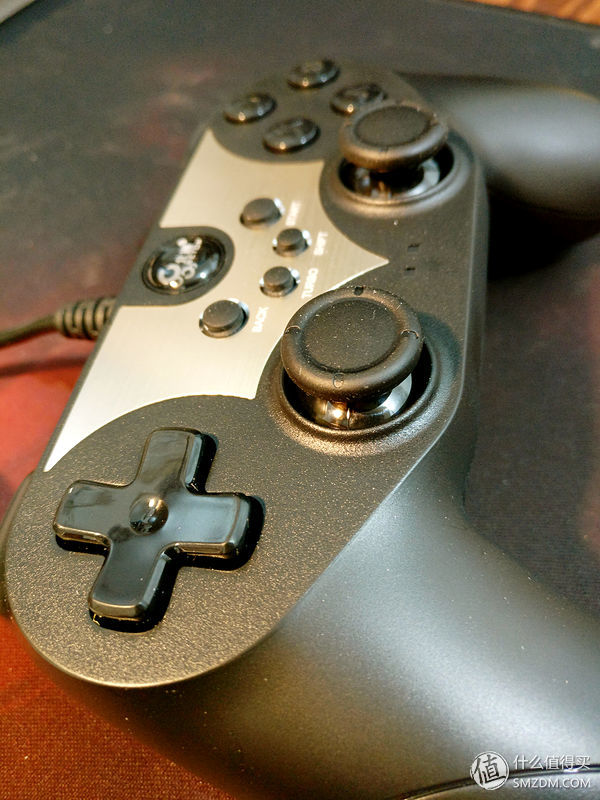 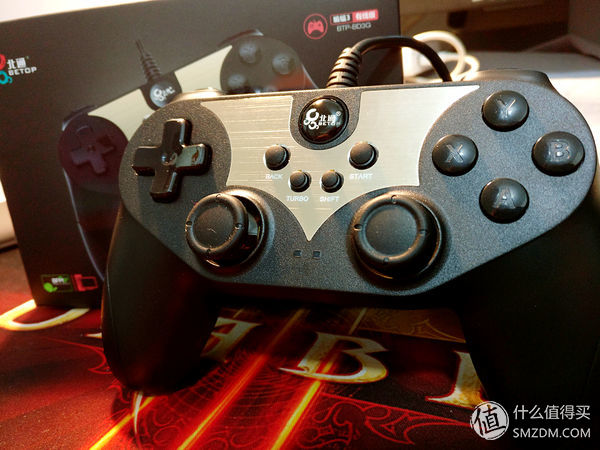 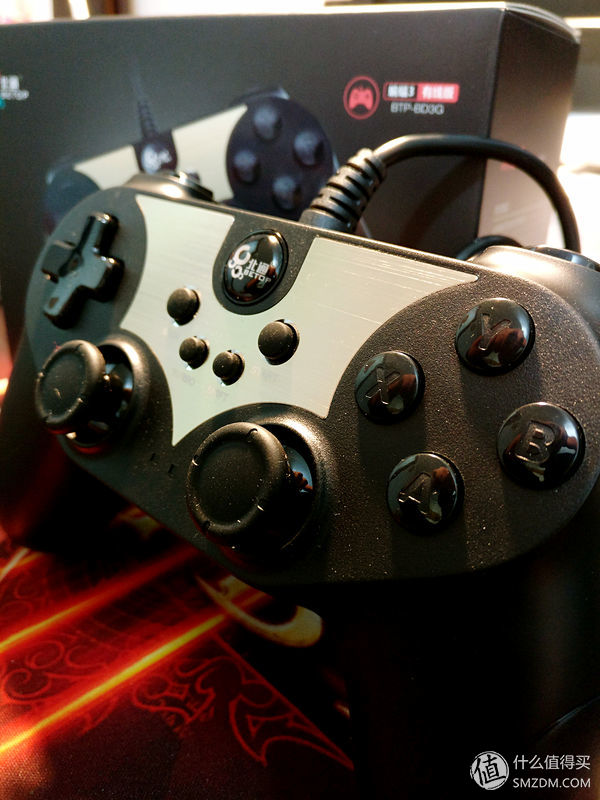 The button layout is similar to Beitong's Condor series. I personally like this layout because I have a Beitong Condor that has been used for many years. . . Only a lot of games Condor can not play, plug in the handle did not respond, does not support seemingly. Let's take a look at some of his keys. 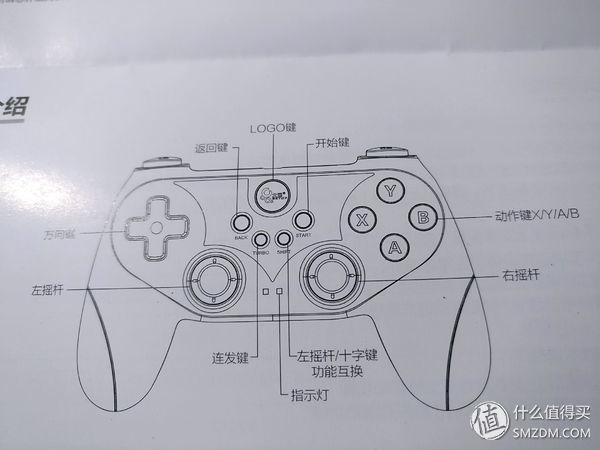 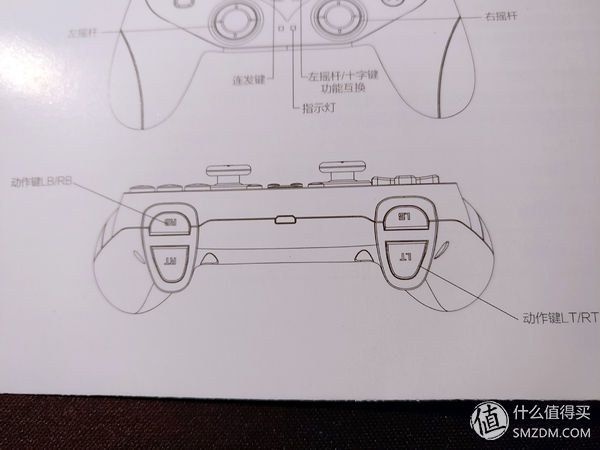 I think the layout and function of the buttons are all conventional, and after all, I can't play any flowers. The handle is still relatively light in the hand, after all, 90% are expected, but the XBOX's handle feels quite a sense of weight, the key feel is still possible, including the intensity of the rocker, the cross key arc design, It's pretty good. 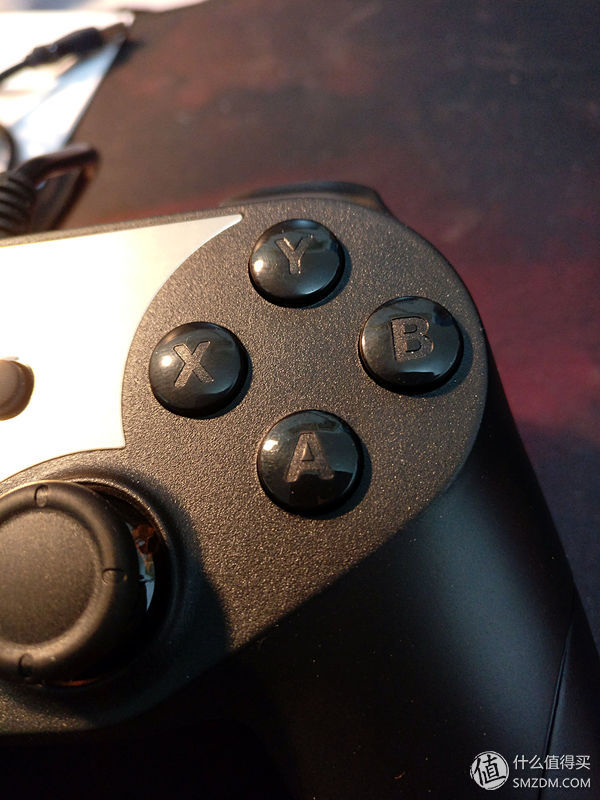 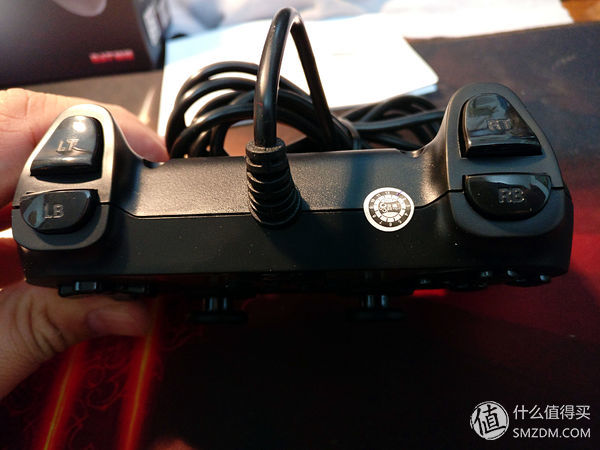 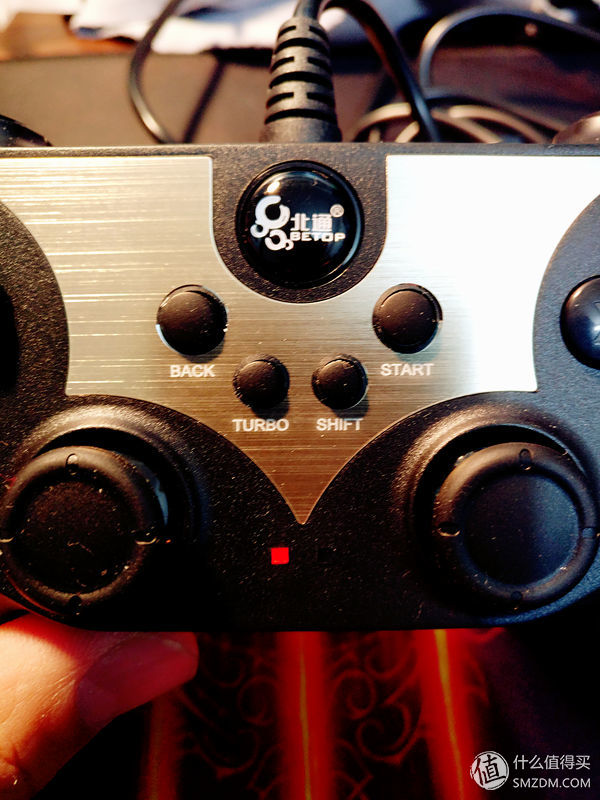 The red dot in the middle is the connection indicator, which indicates that the connection is successful (PC360 mode). The above four small buttons need Tucao. The buttons are small, the distance is short, the rebound is small, and sometimes it will not be able to get stuck. . . It's a bit tricky for people with a lot of fingers, and it's awkward to use fingertips or fingernails. . . By the way, the dust on the handle is actually out of the box. . . In the middle, the round button of the Beitong logo will be pressed to call out the video recording function. It may be to make it easier for people to record video games. Let's compare it with the Beitong Condor. My Condor is in 2012. bought. . . The signs are all gone. . . 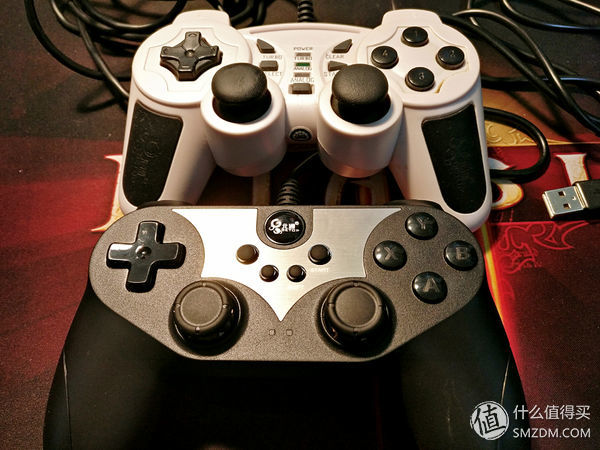 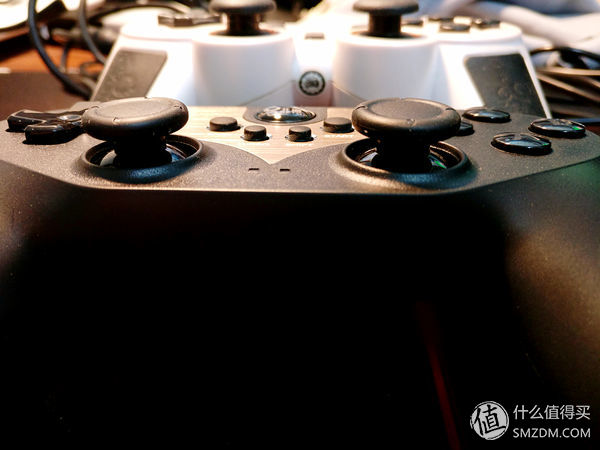 Is not very similar feeling, from the modeling, the main button layout, are more similar, holding the feeling I personally think about the same, after all, everyone's feeling is not the same, but the button's feel is indeed much better than the Condor series, Of course, with the exception of the middle 4 buttons, it feels really affecting the overall feel. . . However, the progress of bat 3 is still very obvious, both in terms of workmanship, material mix, and some details of the processing are still good, but the price is a matter of opinion.

According to the official introduction, the product has 4 characteristics:

1.XD4 engine, plug and play all kinds of game masterpiece

As an ordinary 80-year-old office worker, and I still work as an engineering technician, I sometimes go to work on a day shift. I go to work and eat a meal with my colleagues. Unparalleled relaxation and relaxation. Of course, all of them are usually played on a computer. One person uses a controller and one person uses a keyboard. But now it's not necessary. There are two.

Regarding the above four product features, I did not test them one by one. I mainly tried the functions described in section 1.2.3. Regarding the last BFM mode, I did not need much personally because I would not normally play on mobile phones. The game, even if it is playing games that are played for a few hours, is usually a novel, but now there are Kindles, and you don't have to watch them with your phone. First of all, talk about plug and play mode, anyway, I often play several games can be normal operation (PES2017, Warriors 3, arcade simulator). The handle comes with a vibrating motor ~ When playing live, the shot or steal and physical confrontation will shake ~

The handle vibration intensity is not uniform

1. The middle of the 4 buttons feel bad

2. The middle 4 keys sometimes pressed to get stuck

3. The feeling of brushed metal in the middle is actually not good

In fact, for an ordinary game enthusiast, this handle is very suitable for me, easy to use, the size of the handle feels just right, not as large as the XBOX, feeling is designed for the hands of European and American people, Therefore, the handle of Dafa is more suitable for Asians. Secondly, as an office worker who uses a computer to play games, this kind of plug-and-play controller is very suitable. It is easy to use and designed for different people. With different functions, the consideration was still full of thoughtfulness. The time for the establishment of this brand of Beitong was really not short, and it has been progressing. Hope is getting better and better.

This Type of outdoor led poster also called led AD player is one of new applications for led displays. Developed from led screens, it is more suitable and friendly to operate. Don't need to install as it is floor standing. and could be put anywhere it needed indoor or outdoor environment.

Optional Pixel Pitch 4mm,5mm,6mm.optional sizes 60`'.IP65/54, weather proof; Ultra Outdoor HD led display poster, crystal clear and vivid images; High brightness and auto adjustment according to environment; Intelligent group management, easy and convenient. Thanks to the Cluster controll system and GPS technology, no matter how many posters you have where they are, you could controll them easily and change content quickly.

They are one of none stop money earning machines!